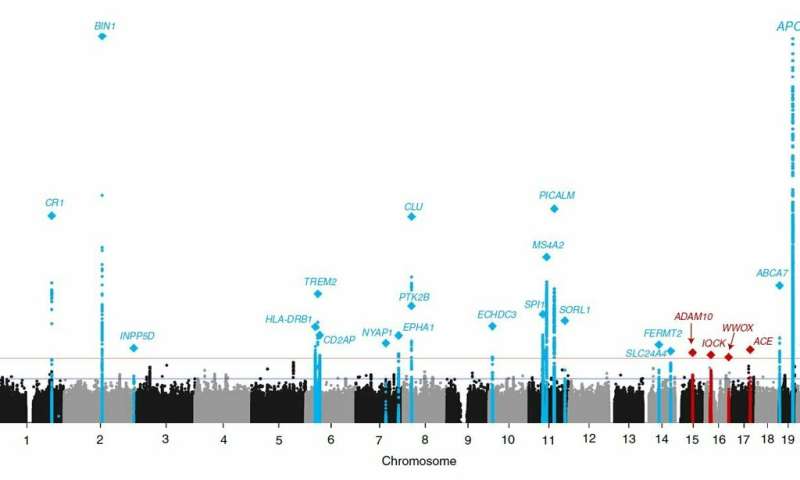 Analysis of genetic data from more than 94,000 individuals has revealed five new risk genes for Alzheimer’s disease, and confirmed 20 known others. An international team of researchers also reports for the first time that mutations in genes specific to tau, a hallmark protein of Alzheimer’s disease, may play an earlier role in the development of the disease than originally thought. These new findings support developing evidence that groups of genes associated with specific biological processes, such as cell trafficking, lipid transport, inflammation and the immune response, are “genetic hubs” that are an important part of the disease process. The study, which was funded in part by the National Institute on Aging (NIA) and other components of the National Institutes of Health, follows results from 2013. It will be published online February 28, 2019 in the journal Nature Genetics.

“This continuing collaborative research into the genetic underpinnings of Alzheimer’s is allowing us to dig deeper into the complexities of this devastating disease,” said Richard J. Hodes, M.D., director of the NIA. “The size of this study provides additional clarity on the genes to prioritize as we continue to better understand and target ways to treat and prevent Alzheimer’s.”

The researchers, members of the International Genomic Alzheimer’s Project (IGAP), analyzed both rare and common gene variants in 94,437 individuals with late onset Alzheimer’s disease, the most common form of dementia in older adults. IGAP is made up of four consortia in the United States and Europe that have been working together since 2011 on genome-wide association studies (GWAS) involving thousands of DNA samples and shared datasets. GWAS are aimed at detecting variations in the genome that are associated with Alzheimer’s. Understanding genetic variants is helping researchers define the molecular mechanisms that influence disease onset and progression.

In addition to confirming the known association of 20 genes with risk of Alzheimer’s and identifying five additional Alzheimer’s-associated genes, these genes were analyzed to see what cellular pathways might be implicated in the disease process. The pathway analysis implicated the immune system, lipid metabolism and amyloid precursor protein (APP) metabolism. Mutations in the APP gene have been shown to be directly related to early onset Alzheimer’s. The present study, done in late onset Alzheimer’s subjects, suggests that variants affecting APP and amyloid beta protein processing are associated with both early-onset autosomal dominant Alzheimer’s and with late onset Alzheimer’s. In addition, for the first time, the study implicated a genetic link to tau binding proteins. Taken together, data suggest that therapies developed by studying subjects with early-onset disease could also be applied to the late-onset form of Alzheimer’s.

The research was led by an international team of experts including Brian Kunkle, Ph.D. and Margaret Pericak-Vance, Ph.D., from the Miller School of Medicine’s John P. Hussman Institute for Human Genomics at the University of Miami, and Benjamin Grenier-Boley, Ph.D. and Jean-Charles Lambert, Ph.D., from INSERM, Lille, France.

Once the functions of the five genes newly associated with Alzheimer’s—IQCK, ACE, ADAM10, ADAMTS1 and WWOX—are understood and examined in conjunction with the functions of the 20 known genes, researchers will be in a better position to identify where the genetic hubs of Alzheimer’s are clustering. Armed with these findings, researchers can look more deeply into these genetic hubs to reveal disease mechanisms and potential drug targets.

A key to these discoveries was the sample size, the largest to date for this kind of Alzheimer’s study. A large sample is especially important to find rare genes that might be involved with a disease.

“Having more and more samples in GWAS data sets is like adding more and more pixels to a photograph—it helps researchers see details that they otherwise wouldn’t and helps them decide where to focus further study,” explained Marilyn Miller, Ph.D., director of the Genetics of Alzheimer’s Disease program in the Division of Neuroscience at NIA. “If the genes only appear in one out of ten thousand people, you need to find several samples containing those genes for results to be statistically significant.”