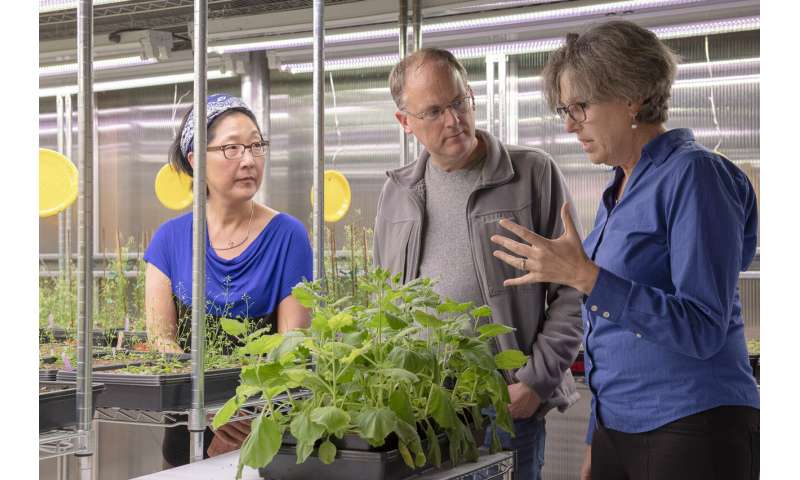 There are drugs derived from plants to treat epilepsy, to prevent migraines and to halt manic episodes in people with bipolar disorder. But in many cases, no one knows exactly how those and other neurological drugs work – what chemical processes in the brain those drugs alter, or sometimes even what the active ingredients are.

Now, researchers at Stanford and the Carnegie Institution for Science have an unusual idea for how to better understand how those plant-derived drugs work. In the long run, that project – dubbed NeuroPlant and funded by a Big Ideas grant from the Wu Tsai Neurosciences Institute – could also lead to new, more efficient ways to develop drugs to treat a variety of neurological and psychiatric diseases in humans.

“We’re interested in finding out what the mode of action is of these compounds from plants that have known effects on the human nervous system,” said Sue Rhee, a senior research scientist at the Carnegie Institution for Science and one of NeuroPlant’s principal investigators. “I think it’s an interesting place where we can potentially connect things like ethnobotany and plant science with neuroscience and perhaps even medicine.”

NeuroPlant is grounded in a simple observation: Plants have a powerful influence on our health and behavior. Around 80 percent of the world’s population relies on herbal medicine for their primary health care, and many modern drugs, including neurological drugs, are derived from plants. That got Rhee wondering: What molecules do plants produce that affect our health and behavior, and what exactly are those molecules doing to us?

In a conversation with Miriam Goodman, a professor of molecular and cellular physiology, Rhee learned that a tiny roundworm called C. elegans could be the perfect platform for studying these questions. For one thing, C. elegans are complete living systems, as opposed to the disembodied cells or isolated proteins researchers typically study, meaning that the NeuroPlant team can study their behavior, nervous systems and genetics all at once.

At the same time, C. elegans are much simpler than humans, while sharing a lot of genetic similarities – about 75 percent of the worms’ genes have human equivalents, and their neurons are remarkably similar to humans’ as well. That means what researchers learn about C. elegans stands a decent chance of applying to humans as well.

With Rhee’s expertise in plant biology, Goodman’s experience with C. elegans sensory systems and the neurobiology and genetics expertise of collaborator Thomas Clandinin, the Shooter Family Professor and a professor of neurobiology, the group thought they could pioneer a new approach to understanding the neurological effects of plant-derived compounds.

The team will start with a large collection of C. elegans worms containing a range of genetic mutations and a plant called valerian, extracts of which are now used in drugs to treat epilepsy and which have been used for thousands of years to treat mild anxiety.

When the team exposes their worms to valerian extracts they’ll watch to see which ones wiggle closer and which flee. As the worms move toward and away from valerian extracts, they will sort themselves according to their genetically encoded responses to those extracts. Once they’ve self-sorted, the researchers can look to see which genes are responsible for that behavior – revealing, in the process, the genetic basis of valerian’s effects on the worms. The team will also study how the nervous systems of the two groups of worms differ from each other. Because humans and roundworms have so many genes in common, these studies should offer hints about how molecules derived from valerian affect humans.

If the experiments with valerian work, the group will branch out to other plants that are the source of neurologic drugs.

The ultimate hope is to use these experiments not just to understand the genetic and neural pathways through which plant extracts and plant-derived drugs work, but also to discover new drugs. Right now, Goodman said, most drugs are developed by screening one small molecule at a time and focusing on just one genetic pathway at a time. If NeuroPlant’s approach works, it could allow researchers to screen many potential drugs at a time and look at how those drugs affect a plethora of genetic pathways all at once, potentially speeding the discovery of new treatments.

For now, the aims are more focused. In a year they hope to have identified a few plant molecules and a few target pathways for those molecules that could explain how a plant like valerian can help treat disease and shape behavior.